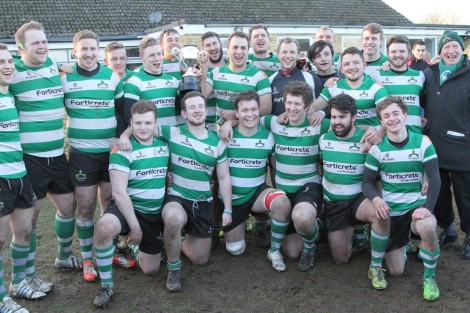 Forticrete-sponsored Buckingham Rugby Club has won the coveted County Cup for the first time in the club's 82-year history after its Senior First XV beat Marlow 34-15 in the competition's final (Saturday 24th January).

John Lambert, General Manager at Forticrete, commented: "As proud sponsors of Buckingham Rugby Club from junior to senior level since 2000, we are delighted to see the club celebrate what is a remarkable achievement.

"The club invests considerable time, effort and resource in the development of its members not only on the field, but off it. As such, it is fantastic to see the club receive its just rewards."

Julian Cook, Chairman at Buckingham Rugby Club, commented: "We saw off strong competition from clubs across the region to be crowned county champions, and the prize is testament to the support of the club's committee, coaches, supporting members and the financial support of local businesses such as Forticrete.

"In terms of the standard of rugby we deliver and the extent of our membership, the club is punching well above its weight - long may that continue."

Man of the match: Calum Gillie