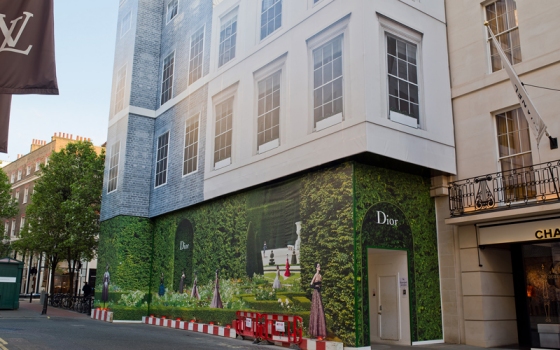 New Bond Street has been one of the most prestigious retail streets in London since it's 18th Century beginnings, and in 2011 was named as the second most expensive retail street in Europe after the Champs-…lysťes in Paris. The Christian Dior name has also been synonymous with haute couture and luxury retail since it's own inception in 1947.

This project required both the internal and external waterproofing of the extended basement area of Christian Dior's flagship London store. A significant extension of the existing floor space on this stretch of famous London road, the extensive basement area will be used as stock rooms, changing rooms, and staff and shop floor areas. It was therefore a crucial requirement to achieve a completely dry internal space.

The property line construction between two existing buildings meant that there was a requirement for waterproofing both new and existing structural elements, including pile caps, underpinning, a new reinforced concrete slab, existing foundations, and also existing vaulted areas at the front of the building which extend below New Bond Street.

Because a completely dry internal environment was required, (defined as Grade 3 by the BS 8102:2009 Code of Practice for The Protection of Below Ground Structures From Water From The Ground) the proposal put forward by design specialists G05, in consultation with Newton, was a combination of Type A and Type C waterproofing systems. Due to the fact that the build was between the flank walls of two existing structures, the Type A system comprised of a combination of the hydrophilic, fully-bonded Newton 403 HydroBond membrane pre-applied below the new concrete slab, and was linked to the cementitious, flexible Newton 107F membrane, which was applied to the internal faces of the walls and the prepared internal areas of the vaults.

The internal areas were also successful in achieving an environmental Grade 3 with regard to their degree of water tightness, meaning that they will be suitably fit for purpose and use by both Christian Dior's staff and customers.

For any further information about Newton Waterproofing Systems, or for a list of Newton Specialist Basement Contractors in your area, please ring 01732 360 095 or visit www.newtonwaterproofing.co.uk