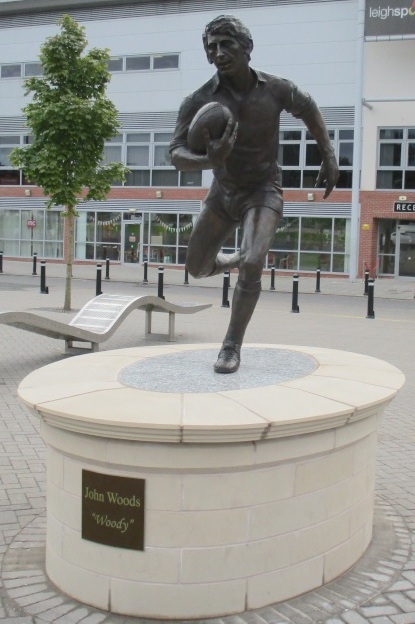 Designed by developer McCauls, the bronzed statue was funded by Leigh Centurion fans, local businesses and a donation from Wigan Council's Brighter Borough initiative which provides a fund for councillor's to support schemes that benefit the community.

As architects for the project, PAB Architects specified a wet cast plinth from Forticrete in a bespoke oval shape, representative of a rugby ball, to honour Wood's time with Leigh Centurions which saw him amass 2,492 points from 349 appearances.

James Hunter, Associate at PAB Architects, commented: "For a project that honours such an influential figure, not only to Leigh Centurion Rugby Club, but its wider community, it was vital that we sourced the highest quality materials,

"Forticrete cast stone provided the ideal solution. Not only was Forticrete able to seamlessly replicate natural stone in a more cost-effective and timely way, but they were able to do so despite the plinth being an irregular shape. Specifying the cast stone in a wet cast format also ensured the plinth is high impact resistant against the weather."

Forticrete's Cast Stone dressings are the perfect example of time-honoured craftsmanship and technology working together in perfect harmony. The result is a wide range of unrivalled quality Cast Stone products to create inspiring, elegant features and detailing.

To find out more about Forticrete cast stone, visit www.forticrete.co.uk