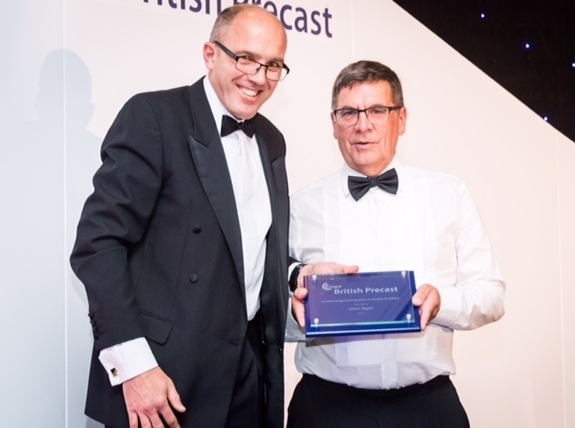 In recognition of his exceptional contribution to health and safety performance and improvement at the company, Glenn Regan, Forticrete's Health, Safety and Environmental Manager, received the award for 'Outstanding Contribution to Health and Safety' at the 2017 British Precast Best Practice Awards, held 29th June 2017 at the Marriott Hotel, Leicester.

Glenn, who officially retired on 7th July, joined the company in 1977 producing wet-cast products at Forticrete’s Masoncrete factory in Matlock, Derbyshire, before taking on the role of Factory Manager in 1995. Under Glenn's stewardship, the factory became one of the first in the industry to achieve BS EN 9001:2000 - the international standard for quality based on third-party assessment – and ISO 14001 – the standard for Environmental Management Systems.

In 2006, Glenn became Forticrete's Health, Safety and Environmental Manager and has since been fundamental in ensuring Lost Time Accidents (LTAs) are kept on a downward trend and has made significant strides to improve the health, safety and welfare of the company's employees.

John Lambert, Managing Director at Forticrete, commented: "At Forticrete, we have a long standing commitment to establishing and enforcing appropriate measures to control and monitor the health, safety and welfare of our employees. Glenn has been integral to not only implementing such measures, but installing a greater awareness and culture at all levels of the business with regards to the management of health and safety.

"For Glenn to be recognised so enthusiastically for his dedication to continuous improvement across the entire business in this area is a fantastic achievement and a fitting and deserved retirement gift. Glenn has invested significant time and effort over the years to ensure that we are not only meeting our targets for health and safety at the company, but surpassing them. I personally would like to thank him for his service and wish him well in his retirement."